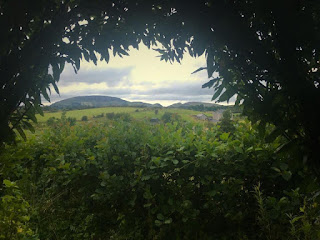 I return to Sheela na Heroes part two at the end of this five part series. This is a legend of the deeds of Daghda, often pronounced like Doyda. I think this is a lovely ancient story example of passage through three stages of what some call a Hero’s Journey. I sometimes tell a shorter version to start a Tree Labyrinth session here at Carrowcrory.

I live outside a village called Keash. 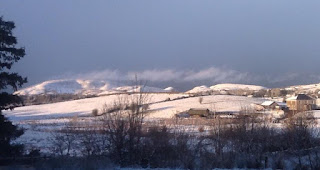 There is a hill above Keash where
local people say the White Hag lives.

They say its impossible for anyone to enter the hill far, and be able to come back out out again. I cannot confirm that, because this is why I am here now to tell you about the deeds of Daghda.

If you visit the hill above Keash and look up you will see a row of caves. Those caves were formed by sea after a long ice age. Inside this hill of caves is said to be The Otherworld where the White Hag is at home.

The White Hag is also called the Cailleach, by some, especially visitors. Cailleach is a ancient description describing the building of hills and mountains.

Something remarkable happens every year within her womb cauldron
.... but more about that later. 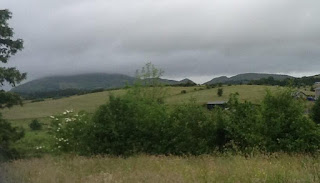 You may well know of the Mor na Coire Ciuin yourself
Through calling her ... The Morrigan

Morrigu, the phantom, the goddess of battle, and death came from W.M. Hennessey’s war goddesses book of 1870.

There are many stories told about the Morrigan, Morrigu etc. Here is one of my versions of a story of Daghda and the Mor na Coire Cuiin.

First, a bit about the deeds of The Good God of the Tuatha De Dannan, Daghda, sometimes pronounced Doyda.

Known as the ‘Good God’ as he was the Tuatha Da Dannan’s god of good harvest and abundance.

He carried with him three items, at all times, a cauldron, what we call a harp today, and a club.

Daghda’s cauldron pot that could feed everyone he met so they would never be hungry because his cauldron never emptied.

When the Fomorians stole his magic harp, Dagda along with his brother Ogma of the Ogham, and Lugh son of his brother Cian, went to retrieve it. They found the harp in a hall of the Fomorian camp, but none of the Formorians could get a sound out of it. When Dagda chanted a spell, it is said the harp flew into his hands, played a loud tune, that called on a storm right onto the Fomorians.

One ancient Autumn, after the end of harvest, Daghda, normally a strong man of endless stamina, became weak and sleepy.

He travelled to the Caileach’s Well, that was known, to those who could find it, as a place to bathe, drink, and return energy and stamina. 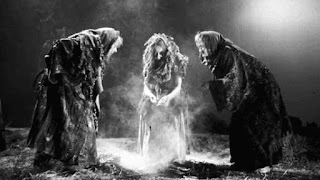 Approaching this well, Daghda
met three dark cloaked women
who were bent over and very busy.

Within the well’s bubbling spring water they were washing clothes. Daghda stopped and contemplated ..

Who are you dark women?
How did you strip off my clothes?
Why am I standing here naked?
Why is there blood flowing from my clothes in the well? 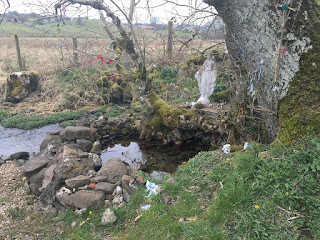 Hmmm, so what was happening here?

These three women we storytellers collectively call the Morrigna. Together they are the human incarnation, the human vision, and the human contact, with the Mor na Coire Ciuin, the Mor Ri Cu, the Mor Ri Ga, the Morrigan.

Their names are Badb, Macha and Nemain.
In some stories these are Banba, Eriu, and Fodhla,

These three women of the Morigna
Are Bedb the rock, sometimes known as Medb (Maeve)
Macha the fire
And Nemain the water, sometimes called Fea, or Fae.

Together they are the Mor na Coire Cuin, the womb of the Cailleach who on the surface of the land are transformed into three hag women.

Hmmm, like some of you, I tend to wonder if this is how Morgan de Fay got to her name?

The Morrigna women replied to Daghda’s 4 questions through chanting.
Dagda, your days are done,
Your bravery is sleeping,
And your fertility for harvest and abundance
Are dissolving with the spirit leaving your body.

Well, at least they shared three answers to his four questions. 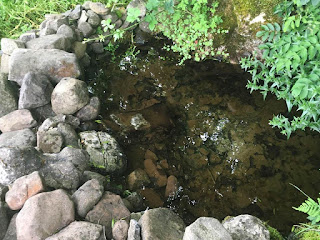 It is your time to ride west with the Sidhe
to Tir na Nog to renew your youth forever.

But, Mr Daghda, if you wish to stay on this earth realm and return your fertility spirit over the harvest and it’s abundance each year return with us into the hill, and stay there awhile.

Come and join with us together as the Mor na Coire Ciuin. Sleep with us, dream with us, embrace us, love us...

Well what ‘good god!’ Man would refuse an offer with three women like that?

And they wowed to Daghda ... “you will return to the light of a morning as a new man”

A new man with ... well you will have to return to part two tomorrow for the continuation of this.

Spoiler alert, we enter into the ‘uisce na sioga’. 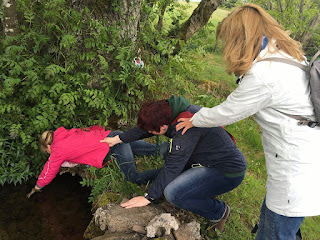 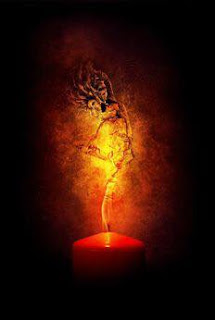